OK, this is pretty lame.

Between Jenny’s being sick, the temperature being around five degrees and my being tired after a long day, neither of us felt like doing anything elaborate.

Jenny went out for a friend’s birthday to an apparently very agreeable restaurant called Bavette’s.

She ordered a ribeye with Bearnaise. 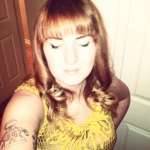 Outfit for dinner, dress from Anthropologie

She got me leftovers.

So I reheated it on the grill.

We took the night off.

We still love you guys.