Crab wing? What’s a crab wing? It’s another great East Coast treasure found on most menus that sell chicken wings. They are just wings covered in a crab seasoning, like Old Bay. It kinda tricks the mind into thinking you’re eating crabs.

Kurt and I were both beat from partying the night before and wanted to do something simple. I had some wings in the freezer that I had frozen a week or so ago for such an occasion, too hungover to go to the store occasion.

After they thawed, I started the grill and Kurt seasoned the wings. He just simply tossed them in Old Bay, salt and pepper. 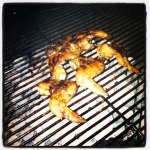 We let them grill for about 20-25 mins, getting a nice char on both sides. When they were done we let them rest for a few minutes.

I dunked mine in spicy mustard, MMMmmm!